The Local Defence Volunteers (LDV) were formed to prevent the threat of invasion should it occur. The L.D.V. later became known as the Home Guard.  The Stonehouse Home Guard Unit was formed probably in the summer of 1940, when Germany invaded the Low Countries and France.

A number of Platoons were formed . The following are two sections one being  the Railway Home guard. 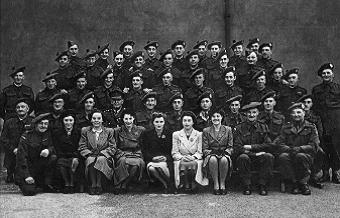 Unlike the first world war, German bombers were a constant threat and so the ARP was formed, organised by Dr. Murray. John Johnston was the local warden who made sure that there was a total blackout whenever the threat was present. He was aided by Special Constables Willie Millar and Jack McKinnon, working 12 hour shifts, policing the village. Although no bombs are recorded to have fallen on the village, it has been noted that a farmer near Goslington saw bombs dropped close; presumably to lessen the load of the German aircraft en route home, after bombing the Clyde. These craters are still said to be in evidence. (extract from J Young)[/fusion_builder_column][/fusion_builder_row][/fusion_builder_container]