A gas company was established in 1844, through investment from shareholders. The company was based in Union Street, where it supplied gas to the Street Lighting Company. In 1885 the annual meeting of Stonehouse Gas Light Company was held on Thursday – Mr W Craig presiding. A dividend of 5% was unanimously agreed to, and it was resolved to discontinue the free lighting of the public lamps, leaving it in the hands of the directors. The price of gas was fixed as formerly at 3s per thousand feet.

Through improvements and further investment, the Street Lighting Company was able to install 27 gas lamps by 1888. This company later came under the control of the Parish Council in September 1897. within one of the photographs below a gas meter can be seen in foreground.

At night a lamp lighter or ‘leerie’, walked along the streets lighting lamps with a long pole with a flickering flame on one end. The children were fascinated by this and the lamp lighters often found he had a crowd following him. In 1899 Robert Bruce was appointed lamp lighter to the village. The production of gas proved profitable for the coal mines, for in 1883 the gas company consumed 229 tons of coal. In 1884 street lamps were supplied with gas free of charge. Gas still lit the streets until around 1950 with the exception of a few lights in the newly developed ‘electric’ scheme.

The group is still seeking further information and will be uploaded  when completed. If you have information or photographs that you would like to share with us then contact the group at info@stonehouse.digitalroutes.co.uk.

1858 – 1861 – James Baird Lessee. Long wooden open sided sheds and some kilns used for drying bricks and tiles made here. Tiles are principally made but bricks are also done when required. Wrought by James Baird. The property of J.S Lockart esqr. 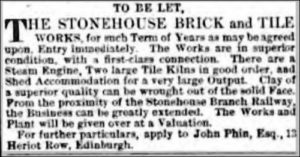 1870- Refer to picture below of advert in Hamilton Advertiser May  and June 1870. Proprietor Robert Borland who has taken over from W Wallace and Mitchell 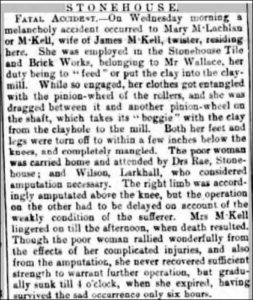 A selection of our photographs of the gas works and tileworks can be viewed below. 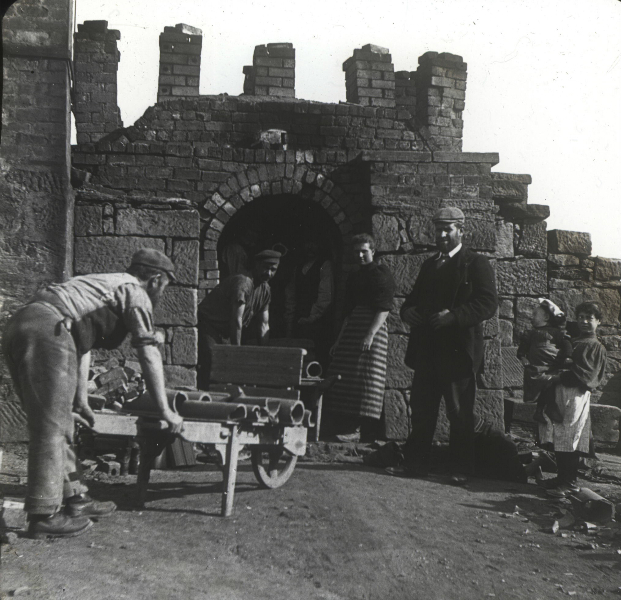