The Lime Kilns of Cot Castle and Fairy Burn

In Scotland limestone has been quarried and mined for many industries such as agriculture, building, paper making, stone dusting in coal mines and iron and steel manufacturers. In agriculture, the addition of lime to cultivated earth is essential to ensure the satisfactory growth of crops, as the calcium it contains is a valuable plant nutrient.

The Stonehouse seam forms an outcrop of the Carboniferous Limestone series from north‑west Glasgow, south‑eastward through East Kilbride to Lesmahagow, and thereon to Auchenheath, Crossford and Carluke.
The geological features of limestone can provide important information of the period from which it was formed, for most are comprised in origin, of organic remains, such as shell and coral. However, through metamorphism and recrystallization of the original mineral constituents, differing qualities of limestone evolve. Most limestone seams are thin and were in general reached by mining. For economic purposes the value of limestone depends greatly upon the total quantity of calcium carbonate contained within the stone.
Where the soil is deficient in lime, this can be addressed by adding some form of calcium carbonate, such as, Marl (ground limestone), burnt lime or slaked (wet) lime. Unfortunately, Marl was not cost effective, as large quantities were needed to obtain the desired effect with the soil. However, burnt or slaked lime has twice the strength, and breaks down to a finer, more applicable substance when added to the soil. During Scotland’s former coal mining industry, vast amounts of ground limestone (Marl) were used in the coal mines for diluting, or covering up fine coal dust, which was dangerous and capable of causing coal dust explosions.
In the building industry lime is used for mortar and plaster, and was produced locally where demand existed. Mixing shale with the correct amount of lime will combine to form the chemical composition of cement. Lime is also an ingredient in the paper making industry, however, the quality of the lime content is not of great importance. 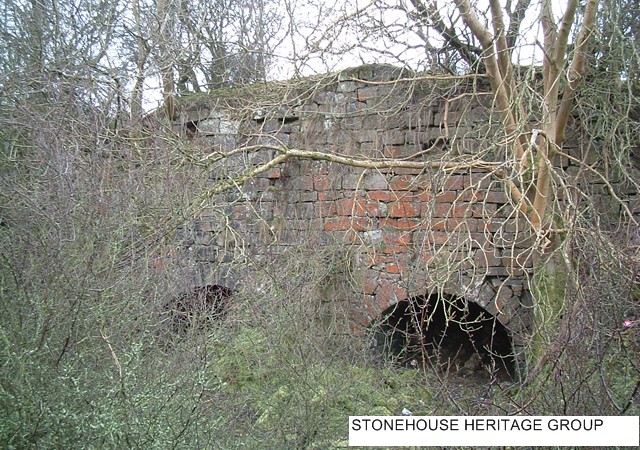 The oldest records of lime mining in the parish date to the statistical accounts of 1790 when the Rev. James Morehead stated “The parish abounds in lime, which has been much used of late, for the purposes of farming. It is generally sold in shells, at L.2: 10 to the kiln, and to the tenants of the proprietors, at L. 15. A kiln contains 100 bolls of flaked lime”.

Within the parish there exist several visible remains of former limestone mining works. The main limestone seam can be seen on the Avon river, 300 metres south of Waukmill, and half a mile further east along the Fairy Burn next to the Fairy Burn Bridge, on the Stonehouse to Sandford road.

There existed another mine on the North bank of the Avon between Glassford Bridge and Cot Castle (Bankhead lime works), as well as quarries along the opposite bank. The thickness of the limestone here is four to five feet at the mine, but boring holes in the area have recorded seams of up to ten feet. Further down the river, about 400 metres North‑east of Avonholm House the main limestone seam appears again, forming an islet in the river.

The limestone mine at Cot Castle dates back to at least 1816, as does a limestone mine to the east of the Yards Farm near Couplaw. In 1836 Rev. Hugh Dewar recorded a statistical account for Stonehouse, where he stated that “there is an abundance of lime of the highest quality”. This was extracted locally and burned using a small seam of coal, mined solely for the purpose of lime burning. The statistical account of this year also record that there were 14 lime burners employed for this task. The census records of Stonehouse states the following men were employed in lime extraction:
Around 1850 there were nearly 50 working limestone mines operating in Lanarkshire, but by 1950 there were none in production. The demise of the lime mining industry was not the lack of limestone, but the exhaustion of readily available supplies, coupled with the increasing cost of production when mining replaced quarrying. The development of the railway and road transport also became more convenient and cost effective in obtaining supplies from further afield, thus local lime burning became redundant.

When the limestone mines ceased production is unclear, but the 1861 statistical account of Stonehouse indicate coal was still being mined principally for the limeworks, though, as shown above, only one miner is recorded as employed from the parish. Possibly the majority of employees were located in Glassford, or, this was an indication of the demise of the limeworks. An account of Stonehouse in 1904, state the limekilns were not in use and the 1881 census statistics show no one was employed from the parish in the production of lime.

Today the remains of two lime kilns can still be viewed on the banks of the Avon, running under the A71, both of which have been infilled for the safety of visitors. These are described as, “a pair of single-draw lime kilns set into a bank, with elliptically arched draw holes and projecting buttresses”. The kilns can be accessed either by Cot Castle or by following the river from the Glassford Bridge. The kilns are worth a visit if you are interested in local history and the industrial development of our village’s past.