Probably the earliest place of burial in the parish, containing over 400 visible headstones. The old kirk was dedicated to St.Ninian in the 9th century, though earlier timber built churches may have been present on this site. All that remains toady is the gable end of a pre-reformation church and it’s bell tower .

One of the memorials here is to a martyr of the Battle of Drumclog, covenanter James Thomson of Tanhill. He was killed by Bloody Graham of Claverhouse during the skirmish in 1679. This memorial stone is known locally as the Bloodstone or ‘Bloodstane’. This comes from the myth that if you insert your finger into the skull’s mouth on the memorial, it would run with blood when you withdraw your finger. The Bloodstone superstition can be explained by the red ochre seam that runs through the grey sandstone, but that doesn’t stop many a schoolchild being scared out of their wits.
The church probably fell into disrepair in the latter half of the seventeenth century and a new church was opened in New Street in 1772 in the centre of the village. The new larger building was situated adjacent to Stonehouse Cross.

The Heritage Group have over the past few years carried out important work recently, raising and cleaning many of the stones which had been pushed over , broken and neglected. The stones which can be read have had their inscriptions recorded and these can be accessed via the members only section of the web site.
MEMBERS ONLY

In January 2002, Stonehouse historian , John R.Young launched his 3rd book. It gives an in-depth review of St.Ninian’s and wishes to make local people aware of it’s great historical significance. John hopes it will give young people a better understanding and appreciation of the cemetery’s heritage value to the local community.
Whilst carrying out his project John had to map out the existing stones and create stone reference numbers for them. A copy of this plan is included in the following link.
St-NiniansGravePlan

The stone numbering follows this plan as no other plan was available from the local authority although the group does have an index of lair owners  however the source of this is information is unclear and the lair numbers don’t match the St Ninians grave plan. In 2019 the group managed to plot the GPS of all the stones and the GPS location numbers are contained on the spread sheet which can be viewed in the members area. 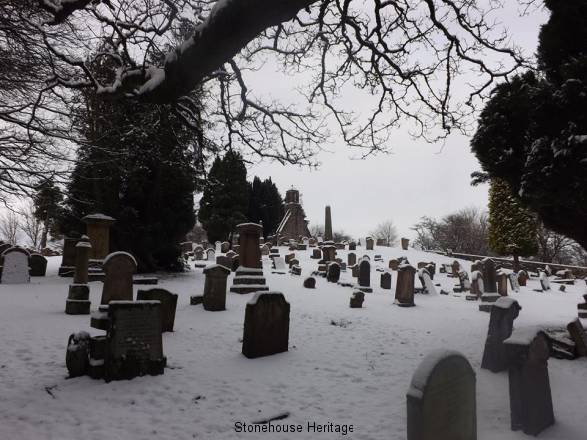 The group has a record of all the gravestone inscriptions that are readable and has created a searchable data set which allows members to search for a main name or associated name and can view any recorded inscription.  this information is located in the  members only area.

John Young has written another booklet on St Ninian and funding for this book was provided by the heritage group. The group has also partnered with a local model maker and a scale model of the perceived layout of the church is available to purchase from the group or direct from the model maker who can be contacted via his web site http://myweb.tiscali.co.uk/stuartfellows

If you are interested in recording gravestones or understanding the symbols used on stones then the attached document. Gravestone recording.[]