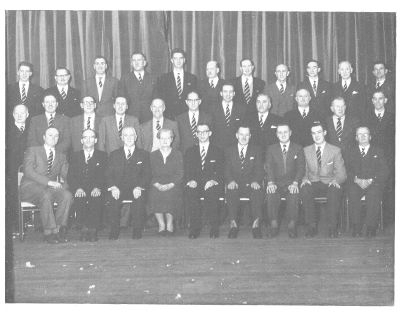 Image 2 of 13
Stonehouse Male Voice Choir was founded in January 1936. It was created out of the enthusiasm for singing that held sway over a group of employees at a local joiner.

These fellows, who loved to sing while they worked, set up a meeting in an ante room of the public hall on the 10th of January 1936 where a choir was formed with 18 members. Within 3 months the numbers had swelled to 40 members under the conductor Robert K. Chalmers.

Mr Chalmers ,a short man, was fondly known as “Wee Boab”. Originally an instrumentalist he also possessed a pleasant voice and a wide musical knowledge. He could turn his hand to poetry and would frequently give readings of his work at concerts. Under the literary alias of “Couplaw” he published articles on diverse subjects in newspapers and magazines.  He was the composer of “In Praise of Avon” that he dedicated to the Stonehouse Male Voice Choir and it quickly became their signature tune. The piece ends with the following elegant and stirring lines

“As lang as Scotia’s Rivers rin

The choir soon found themselves in great demand and under Bob’s tutelage they performed at the British Legion festival of Remembrance, at St Andrew’s Halls and even made radio appearances. Perhaps the height of their success was to clinch the Shield for Male voice choirs at Dumfries Festival on the 14th of May 1936.

Bob continued as the conductor for a long and contented period up until his death in 1957.

– A picture of Chalmers can be found on page 11 of the silver jubilee programme.

The choir cast around for a new conductor and offered the post to Mr Robert Hunter of Wishaw. Mr Hunter , who at the time was organiser of the Lanarkshire Male Voice Choir, accepted and filled the position for a year.

The role was then taken on by Mr John Hamilton who was an experienced and successful conductor. He brought a great deal of enthusiasm and expertise to the choir and by the start of the nineteen sixties he had created a group of singers capable of choral work of a high standard.

In the first twenty five years of the choir there were only two pianists. May Kirkland (nee McNiven) was at the keyboard until she emigrated to New Zealand with her family in 1959.

She was succeeded by Mrs Barbara Mather who maintained the high level of commitment and ability of her predecessor.

By the  silver jubilee of the choir in 1961 there were still 4 original members , John Hawthorn (choir librarian) Dan Mcniven , Tom Millar and William Scott.

The Silver Jubilee concert was held at the Congregational Church at 7.30pm on Friday 17th of March 1961 admittance 3/-.  A look at the programme from that evening shows how varied the repertoire of the choir was. Bach, Beethoven and Saint – Saens were all represented as were Burns and Vaughn Williams. The evening culminated with The Battle Hymn of the Republic and closed with Blake’s Jerusalem.

The programme for the event is of significant local historical interest in itself. There are upwards of 20 local business’ advertising in the booklet and though none remain(with the exception of Galloway and Mcleod) it gives a good indication of how bustling the local economy was in the years after WW2.

The position of conductor fell vacant once more and for the first time a choir member was elevated to conductor. John Lawrie , who had served as sub conductor for a period and a valued member of the bass section took on the leadership of the choir and also the role of musical arranger. Mr Lawrie , from Glassford was a senior teacher at a school in Shotts and over time his work responsibilities forced him to curtail his work with the choir and the group were once again looking for a new conductor.

While the search was on news reached the choir that a former member of the renowned Glasgow Orpheus Choir had recently relocated to the village. At first Murdoch Mclean was hesitant to accept the role but was eventually convinced that his skills and experience could further enhance the choir and it was with Mr Mclean at the helm that the choir performed their golden jubilee concert.  The event took place at the Paterson U.F Church on Friday 22nd March 1985 at 7:30 with the programme costing 20 pence.

A look at the selection