Places of Worship in Stonehouse

Home/Places of Worship in Stonehouse

The following text provides a brief outline of the various churches and religious organisations and societies that were opertating in Stonehouse .  A more detailed timeline and detail for each of the churches including church group history as well as newsletters and articles are contained in our members area.

The history of church life in Stonehouse can be dated back to the 9th century, when a local chapel was dedicated to St Ninian, who worked as a missionary in the Scottish lowlands. The Church has had a strong influence on community life ever since and, by the 17th century, punishments were being dished out for gambling, drunkenness and sexual misdemeanours. In A History of The Established Church in Stonehouse, local historian John R Young reveals that “for more serious crimes, such as incest, the perpetrator had to stand at the kirk door, bare footed and legged, from the ringing of the ‘second bell to the last’, at every church in the presbytery”.

The Sabbath was fiercely observed.  In 1836, the Rev Hugh Dewar of the Old Parish Church wrote: “The hallowing of the Sabbath day is here most scrupulously attended to, by all ranks of persons, both in town and parish; except in going to and from church, you will hardly see a person on the street.” 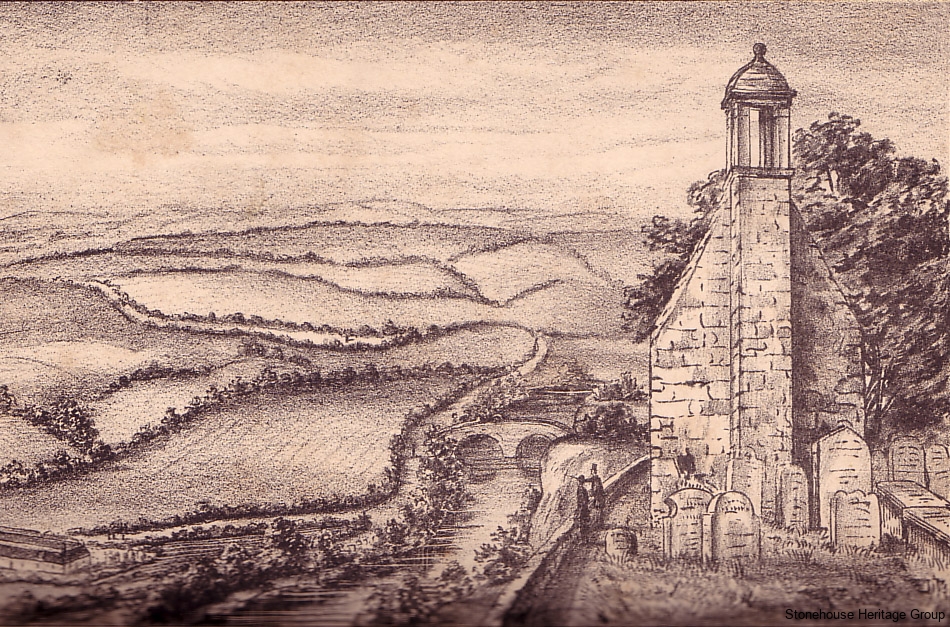 No records exist that tell us exactly when the church opened however we know that the the old Kirk in St Ninians Kirkyard was still in use in 1696 and was restructured in 1732 and that it was still in use in late 1700’ early 1800.  So at a guess it may have been early 1800’s when the parishioners moved to the Village Kirk .

Its not clear if Rev Wilkie who was in the Old Kirk in the Kirkyard in 1806 or Rev Dewar moved to the Village Kirk when it opened. Rev Dewar was replaced by Rev James Dunn in 1861.  In 1887 Rev James Wyper Wilson was ordained.  We know that by 1894 the poor condition of the Parish Church resulted in a survey being requested to investigate whether the church was safe and could be adapted to accommodate a growing congregation of around 900 worshipers.

After a great deal of debate and disagreement over the future of the Parish Church, it was decided to establish a fund to raise the necessary finance to construct a new Parish Church and identify land for its erection.

The unity of the Church of Scotland was  blown apart by one of the most important and far-reaching events of the nineteenth century – the co-called Disruption of 1843.

‘Disruption Day’ was a day when 474 ministers walked out on the General Assembly in protest against certain principles of the established church. This split in the Kirk caused bitter divisions, left ministers without homes and salaries, and meant that whole congregations found themselves without churches to worship in.  It left Scotland with two national churches – the Church of Scotland and Free Church of Scotland – instead of one.

In stonehouse it resulted in the following

The group has a few newspaper articles, organ recitals and info which can be found on the members pages.