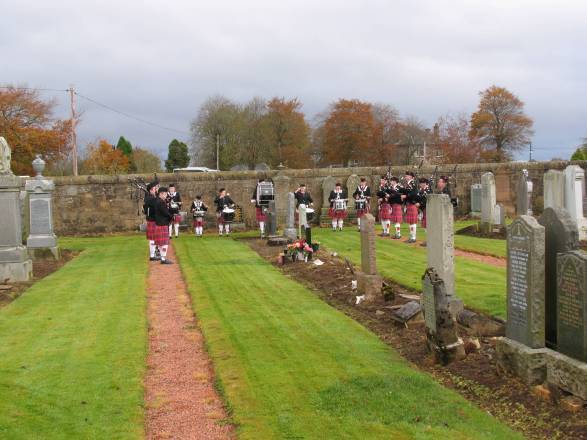 Stonehouse Cemetery known locally as the  Manse road cemetery  or middle cemetery is , only a few yards from  St Ninians Kirkyard and the Glebe cemetery.

Opened in 1906, the cemetery  is rectangular in shape and  designed as a lawn cemetery bounded  by a decorative perimeter wall while the interior is laid out around a simple geometric  central feature focusing on the war memorial accessed from the main pathway with the  rest  of  the  site laid  out in  a  grid  formation.  It is landscaped with continuous borders and ever green trees.

The cemetery contains 1,495 lairs as they are known in Scotland  and the burial took p[lace on 17th August 1906. The cemetery is laid out in four  different sections (A,B, C and D) and is arranged around a central circular feature containing the Cenotaph dedicated to the men of Stonehouse who died in the two World Wars. (A searchable  index  of personnel who were killed in the Great War (WW1)  is listed under Village at war , however further details are available to paid members under the historical information drop down menu.

Research on the war memorial  was started by the late Jim Davidson of Aldersyde cottage on Side head road and subsequently picked up by William Mackie and then John Roger who are also no longer with us. Through their research twenty eight personnel from Stonehouse were identified as missing from the Cenotaph. Lottery funding was sought and obtained in in 2007 and in 2008 and  the group organized the cleaning of the war memorial, pointing of the steps and the adding of all identified personnel missing from Cenotaph.

The group through its voluntary members commenced recording the gravestone inscriptions for the cemetery. Thanks go to late Harry Carty who commenced this work.

It should be noted that the information recorded on the site is only a snapshot of when it was carried out and any burials, alterations to  gravestones or new gravestones will have to be added.  A layout plan can be viewed by clicking here .

An index of interments was compiled by the late John Roger a member of the group for a number of years and whilst it is not 100 percent up to date it will give those researching family history a starting point for searching the cemetery.