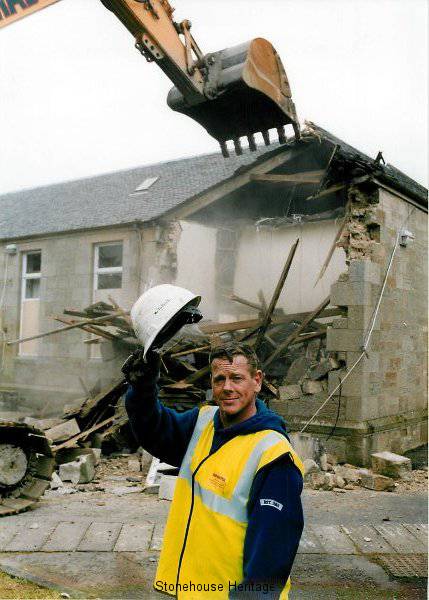 Image 17 of 17
Probably the first hospital in the parish was at Spittal House, dating back to at least 1596. During the 17th century the land of Spittal was said to belong to the hospital of Hamilton, St. Thomas Martyr. The word Spittal, Spittel or Spital (Scots) means either a charity hospital or a hospice (shelter for travellers). Some believe a convent was once established at the Spittal, but there is only a little evidence to support this. It is said that travellers sought shelter and refuge on their journey here under the ‘hospitality’ of the convent.

On the 9th January, 1896 Stonehouse,Hospital was officially opened and was originally built as a local authority infectious diseases hospital for the Middle Ward of Lanarkshire c.1896.

“On the Friday evening prior to the opening the Parish Councillors interested met in the premises, and were entertained by the committee to a social tea, having previously been shown through the different wards. County Councillor Templeton,
chairman of the sub committee presided and, in a short and appropriate address, said he was pleased to preside over an assembly comprising the County Councillors, Parish Representatives, and the Parish Councillors of Avondale, East Kilbride, Glassford,Stonehouse and Dalserf, along with the architect, the tradesmen, and other officials connected with the building of the hospital. County Councillor Barr, (East Kilbride), in an able speech set forth the merits of the hospital – the pleasure it gave him to see so many taking an interest in it, the careful management and strict supervision exercised by the committee, and hoped that it might prove a great boon to the parishes interested. They had secured the services of an able matron, and he moved a vote of thanks.  Mr. R. Smillie, (Larkhall) replied, observing that people thought the reign of angels was past, but they were still occasionally to be found, and more frequently in the wards of a hospital or a similar institution than anywhere else. He was always a great admirer of the fairer sex, because more of their number in all grades of society devoted their lives to alleviate suffering humanity. Miss Stevenson had won a reputation as an efficient nurse second to none, and he hoped she would be long spared to enjoy her position.

The cost (for the new hospital) as stated by the chairman, will be between £5000 and £6000.’  position. On her behalf, and that of the staff, he thanked them for the compliment. There were upward of 50 gentlemen present, including Mr. Dobson,
sanitary inspector; Mr. Stewart, and his assistant; and Dr. McLean, lately appointed medical attendant to the hospital. Mrs. Wilson, the county doctor’s wife, was also present, and inspected the hospital. The cost, as stated by the chair
man, will be between £5000 and £6000.

The original buildings had a simple domestic character with a rather irregular roofline. It later developed as a sanatorium for non‑pulmonary TB. In 1916 a Theatre and X‑ray Block was designed by Gavin